The Cleaner is Present is a durational site specific performance created in 2013.

I was invited by Anxiety Arts Festival to create a performance in response to Safe by Todd Haynes.

Anxiety Arts is a festival run by the Mental Health foundation which explores both mental health issues and cultural anxieties.

The film strand and my performance within it was curated by Jonathan Keane (Curator, Actor and programmer of the Lesbian and Gay Film festival in London, now called BFI Flare).

The festival wasn’t queer but Jonathan’s programming gave it a very queer sensibility.

Safe is an astonishing film. It’s set in 1980s California. Julianne Moore plays Carol, an upper middle class woman in an unhappy marriage who becomes increasing allergic to her environment. In the end, the only safety is complete isolation.

At the time, the Hackney Picturehouse were the film would be shown was was part of an ongoing battle by the Brixton Ritzy cinema workers to earn the Living Wage.

The Artist was also Present 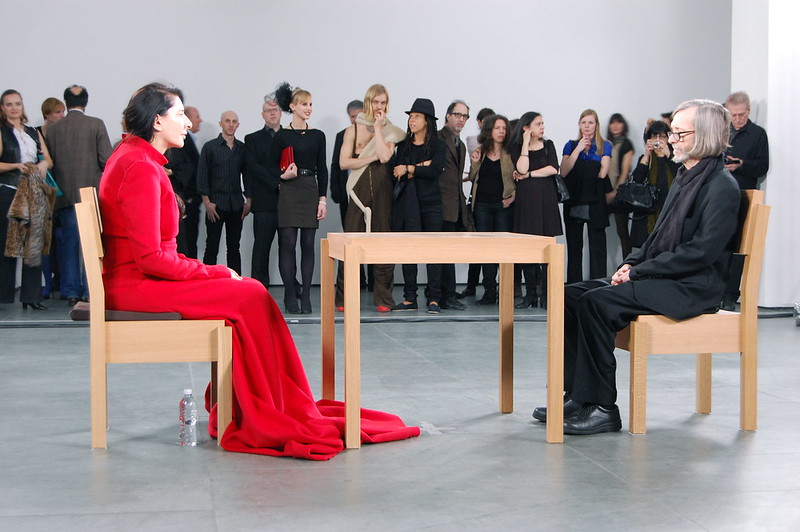 Marina Abramović, The Artist Is Present, 2010, Photo by Andrew Russeth

And just perchance, the Grand Dame of Performance art Marina Ambromovic herself was in town doing nothing for 512 hours in the Serpentine Gallery in Hyde park.

I was very mindful of this and how the body and presence of the performer have become like a fetish.

I thought about boredom, perseverance and mundanity.

I decided I wanted to explore the anxiety created by the class conflict in the cinema the film was being screened in and to highlight the maids who look after Carol in the film.

This is Queer St Zita. She’s based on St Zita, the Patron St of Maids and housekeepers.

She is an Irritant.

Her flaming heart is combustable.

Her washing up gloves have acid stigmata.

St Zita queers the act of cleaning by making a mess.

Instead of being invisible she demands attention.

Instead of removing the traces of human activity St Zita leaves her mark everywhere.

I used cleaning hazard signs to draw attention to the many dangers faced by cleaners.

There are the interactions with the audience loosely based around metaphors for low pay such as being paid peanuts or metaphors around mess and cleaning.

Making the work created Jonathan, the curator and for me. Suddenly what could and couldn’t be said came to the fore. What trouble would be made and for whom?

The piece finishes in the cinema with a soundscape based on testimonies from cleaners in the Unite union I met on a demonstration they had organised in King’s Cross London.

Featuring the voices of Marcia, Caro and Jose recorded at a demo in Kings Cross London for the International Day of Justice for Cleaners and Security Guards.

The performance is dedicated to the striking workers of the Brixton Ritzy.

The piece is directed by Starlight Stephen with costumes and props by Bird and Lucas McKenna.

With thanks to Dr Charlotte Cooper